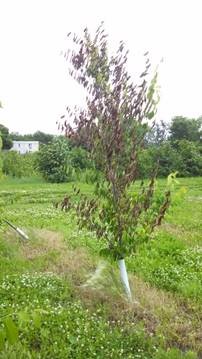 Importance: Exotic – Australia has one of the best elm tree collections in the world because most other countries have had theirs devastated by Dutch elm disease (DED).

Symptoms: DED is a vascular wilt disease and symptoms vary depending on whether trees were infected through beetle feeding wounds or through root grafts. Where beetles are involved, trees show wilting, curling and yellowing of one or more branches at the top of the tree. If the disease progresses rapidly, infected trees may only survive for two to three years, or they may survive for years with the number of wilted branches increasing annually.

Transmission: There are many bark beetles which are potential vectors of DED spores, but only a few are regarded as significant vectors. It may be spread by root grafts between closely planted elm trees.

Host range: Most Ulmus spp. from Europe and North America are highly susceptible. Some Asian elms have a greater level of resistance. DED has been recorded on the genus Zelkova but it is highly resistant.

For further industry pest information refer to the factsheet and at www.pestid.com.au

An initiative of the levy-funded National Nursery Industry Biosecurity Program (NY15004) and the project Building the resilience and on-farm biosecurity capacity of the Australian production nursery industry (NY15002).