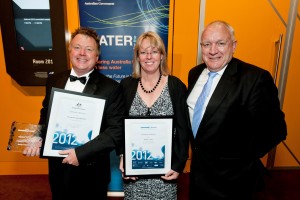 A win in the national savewater! Awards ® by a production nursery is a leading example of what is being done within the industry in water conservation, reports Nursery & Garden Industry Australia (NGIA).

“In a 12 month period they reduced their use of potable water by 80% and had an overall reduction in water use by 36.75%. This has been achieved by investing in innovation and infrastructure and shows again the leadership from our industry in water saving practices,” Mr.Prince said.

The specialist production nursery is owned by Sonja and Andy Cameron and has been operating in the Hills district near Sydney since since 1992. It grows perennials, herbs and other specialist lines.  Cameron’s Nursery was also one of only three finalists in the 2012 Prime Minister’s Water Wise Awards.

Sonja Cameron, a past president of Nursery & Garden Industry, NSW & ACT, said she was delighted that their work had been acknowledged.

“Pioneering this project, where our ideas were not common-place in the industry, had its risks but the results have been worthwhile. Becoming a winner highlights our success in saving water and the possibilities for others to do the same within our industry”, says Ms Cameron.

“Throughout the development of the nursery, we have worked to accreditation and EcoHort standards and now we have systems in place, gaining that accreditation will be our next step.”

Ms Cameron particularly wanted to thank Industry Development Officer, Michael Danelon from NGINA and whose position is funded through the nursery and garden industry levy program.

“Michael is a great example of our industry levy at work – he has provided invaluable and independent advice to us through the development of the nursery and our water saving innovations.”

Cameron’s Nursery received the 2011 Green Globe Award for water from the NSW Government for water saving achievements and is an active member of NSW government’s Sustainability Advantage Program.

Mr Prince said in both production and retail nursery sectors the national nursery & garden industry strives to implement best practice when it comes to water saving.

“Through our nursery industry (NIASA) and Garden Centre (AGCAS) accreditation schemes and specifically the EcoHort environment management system, water saving has been a priority focus within our industry for more than a decade,” said Mr. Prince.

In recent years nurseries across several states have won water saving awards ahead of other business sectors, including Nursery Traders in Queensland that won the Prime Minister’s Water Wise Award in 2011 and Mansfield’s Propagation Nursery in Victoria that won the savewater! business award in 2008.