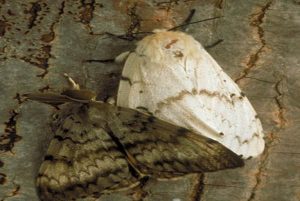 Symptoms: Currently the Asian Gypsy Moth has not be found in Australia but has the potential to damage both native and commercial forests as well as ornamental plants. Eradication programs in some areas of North America and New Zealand have been successful but at a cost of $20 million or more.

Description: Eggs are laid on mass in clusters approximately 1-2 cm by 2-3 cm, several egg clusters can be found grouped together. They are covered in a tan to yellowish fuzz and can contain 50 to 1000 or more eggs. Egg clusters are deposited on any hard surface including trees, rocks, furniture, machinery and buildings.

Immatures: Larvae can range from 3 mm (1st instar) to 65 mm (6th instar) depending on the development stage. Newly hatched larvae are black and hairy, later developing a mottled yellow to grey pattern with tufts of bristle like hairs. (The hairs can cause a skin rash for some people.) Mature caterpillars have two distinct rows of verrucae (warts) along their back, usually four pairs of blue warts starting at the head then six pairs of red warts towards the tail. The median and side strips will vary as well as larvae colouration. Larvae colour can vary from bright yellow, yellow, yellow-grey, grey and black depending on the geographical location of the population and hybridization between different races.

Adults: Male Gypsy moths are brown with a darker brown pattern on their wings. Females are slightly larger and nearly white, with a few dark markings on their wings. It is difficult to identify the species of moth from the adult and the 4th or 5th instar is needed for actual identification.

Damage: Newly hatched larvae can live for up to a week without feeding, allowing them time to move to a host plant, where they begin feeding on new foliage. Young larvae can spread for kilometres by the wind, floating on silken threads, while adults can fly up to 40 km before mating.

Most damage to host plants takes place during the final caterpillar stages. A mature larvae can eat up to one square meter of foliage before pupation. A severe infestation can completely defoliate host plants, killing them or reducing their capacity to tolerate other insect pests or diseases leading to death.

Adult moths do not feed.