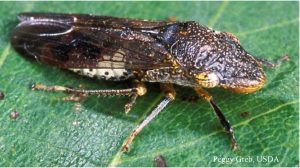 Importance: Major importance as a vector of Pierce’s disease (caused by the bacterium Xylella fastidiosa). This pest is exotic and not known to occur in Australia.

Symptoms: The most characteristic symptom is leaf scorch. Stems often mature irregularly, with patches of brown and green tissue. Flower clusters on infected plants may set berries, but these usually dry up. Symptoms are usually more pronounced when plants are stressed by high temperatures or drought conditions. Symptoms on citrus (variegated chlorosis) may occur in twigs, leaves and fruits. Symptoms can manifest on trees from nursery age to over ten years old. Climatic differences between regions can affect the timing and severity of disease symptoms. Hot climates accelerate symptom development, however, in cooler climates it may be confused with frost damage and go undetected for some time.

Description: Egg: The greenish, sausage-shaped eggs are laid in a single layer of about 10 to 12 under the lower leaf surface of young, fully developed leaves. The female covers the egg mass with the white hydrophobic chalky material, for protection from parasites. Immatures: Nymphs are wingless and look similar to the adult. Adults: Dark brown with small yellow dots on head and thorax and are 13-14 mm long. Head and legs are yellow-orange in colour. Eyes are yellow with dark speckles. Underside of abdomen has ivory and black markings. The large, translucent, smoky-brown wings have reddish veins. A strong flyer capable for moving from plant to plant.

For further industry pest information refer to the factsheet at www.pestid.com.au, an initiative of the Nursery Levy funded National Nursery Industry Biosecurity Program and ‘Building the resilience and on-farm biosecurity capacity of the Australian production nursery industry’ Project.