Pest of the Month: Vegetable looper 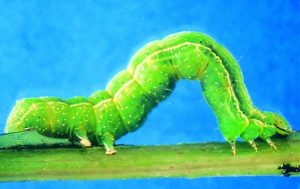 Importance: Occasionally a significant pest of broad leaf vegetables as well as Geranium, Dahlia, Coleus, Tomato, and Citrus amongst others.

Egg: Small, round and pale or light yellow-green, usually laid singly or in a small cluster on underside of leaf. Hatch in 3 to 6 days after laying.

Immatures: Go through six growth stages over a 2 to 3-week period. Newly hatched larvae are small, pale green with dark heads. Older larvae can grow up to 40 mm long with a body that tapers towards the head. They can vary considerably in colour but are usually green with white strips running the length of the body, some can have black dots along the sides. They move in a distinctive looping motion and are often difficult to find as they feed on underside of leaf. Look for elongate, dark brown droppings on lower leaves or on the floor near potted plants.

Pupae: Green with brown markings resembling a face, found in a simple cacoon under a curled leaf. Pupation take approximately 14 days in summer and longer in winter.

Adult: Moths are about 35 mm long, mottled grey or brown with a bunch of hairs on its head that look like a horn, and irregular-shaped projections along the centre line of the back. Forewings are dark brown with characteristic silver-white markings. 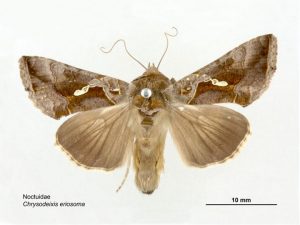 Damage: Larvae are mainly leaf feeders but occasionally feed on flowers, pods and grain. Beans with softer pods are at most risk of damage. Young larvae feed on only one side of the leaf, leaving translucent ´feeding windows´. Older larvae can skeletonise leaves, chew irregular holes, or feed from the leaf margin. They can chew pieces out of the leaf veins to cause the leaf to collapse umbrella like around them. Large infestations can defoliate a wide range of ornamentals. Soft-foliage pot plants can be seriously damaged.

« What research should the nursery industry invest in? » New project to help future proof the Australian nursery and garden workforce