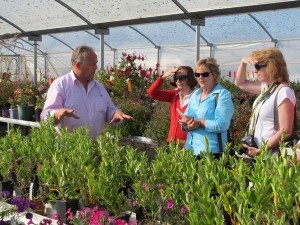 Members of the Horticultural Media Association of NSW recently conducted a tour of the Sydney University research facilities in Cobbity, NSW. The primary objective of the tour was to see how the scientific trial work often referred to in plant and/or product marketing materials is actually undertaken.

As well as looking at some of the current ornamental plant breeding programs being carried out with plants such as Verbena and Argyranthemum, the group also looked at their breeding work with tomatoes and cucumber varieties, as well as ornamental and agricultural grass trials. 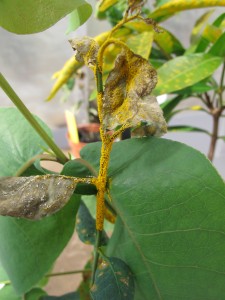 Sydney University currently run independent testing for several companies such as Scotts Australia, Bayer and have also run trials directly for the nursery and garden industry.

Jodie Richardson-Harris, the research scientist who has been involved with some of the more recent testing of Scotts products, went through some of the methodology used for the trials as well as showing the trial beds used.

Sydney University also have been doing studies on Myrtle Rust including work to identify vulnerable species within the Myrtaceae family.

Future tours of these facilities are being planned for the broader horticultural industry and will be promoted via the various ‘Green Industry’ associations.