The Australian Financial Review yesterday published its second special report on the 202020 Vision. This report follows on from  its first special report in November last year. This second report focuses on the theme of productivity, along with some of the outcomes from a roundtable forum it recently hosted on the 13th of March in Sydney . 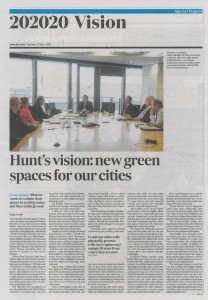 The second AFR special report of the 202020 Vision

During the roundtable Minster Hunt stated that “I want our cities to be physically greener with more spaces and canopy 10 years from where they are now, and 20 years from now to be greener than they are a decade away”.

Links to the online stories can be found below.

« Expressions of Interest Sought for USA Green Infrastructure/Production Study Tour » Are you a business leader within the Australian Horticulture Industry?