Mango shoot looper (Perixera illepidaria) has been detected for the first time in Australia on the Atherton Tablelands, Far North Queensland, in September 2021.

The Queensland Department of Agriculture and Fisheries (DAF) is responding to a detection of this exotic moth, and further surveillance in far north Queensland is underway to determine its spread including suspect samples collected at Kennedy 200km from the initial detection.

The mango shoot looper poses a significant threat to mango and lychee growers and other fruit trees if it spreads.

Since the initial detection in Mutchilba, subsequent detections have been reported by local agronomists and by DAF surveillance staff on several other commercial mango properties. These properties are located at Mutchilba, Mareeba, and Bibhoora on the Atherton Tablelands in Far North Queensland.

In October 2021, a suspect sample was collected at a property in Kennedy which is 200km from the original detection sites. The sample was morphologically consistent with previous Mango shoot looper samples, but confirmatory tests are still underway, however if confirmed the pest infested area will be at least a 200km radius.

On Wednesday, 27 October 2021, the Consultative Committee on Emergency Plant Pests (CCEPP) met and declared Mango shoot looper an emergency plant pest under the Emergency Plant Pest Response Deed, however, it also agreed that it is not technically feasible to eradicate, because:

DAF is working closely with the potentially affected plant industries, and Biosecurity Queensland’s chemical use staff are liaising with industry and Agri-Science Queensland to determine which chemicals may be effective against mango shoot looper.

Applying for emergency use permits and registering chemicals is a priority for the Department.

About the mango shoot looper 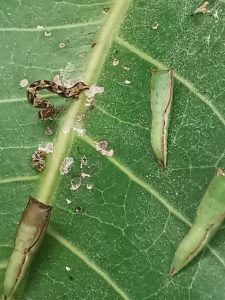 Mango shoot looper is a pest of mango and lychee with other fruit trees considered potential hosts including rambutan, logan, cashew and pistachio. Like other loopers, the Mango shoot looper is differentiated by the colour and the silken threads the larvae (looper) use to move around the canopy, size being 2mm wide and between 17mm and 22mm long.

Observations indicate that the looper primarily attacks the flowers and fruits of mango but may also feed on the vegetative flush.

An incursion of the mango shoot looper could be devastating for the industry, causing mass leaf loss and reducing plant photosynthesis.

If you detect any signs of mango shoot looper in host plants, please contact the Exotic Plant Pest Hotline on 1800 084 881 right away – early detection is vital for managing this pest. Immediate instructions will be given on how to collect and submit samples.