Biosecurity pays off for Pohlmans Nursery 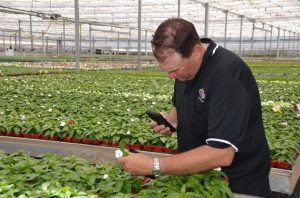 When Pohlmans Nursery first started looking at ways to improve pest, disease and weed management, they never expected the results would include a saving of around $350,000 per year on day to day operations.

Having worked their way up to certification under the industry’s on-farm biosecurity program, BioSecure HACCP, Pohlmans are also helping to revolutionise the way production nurseries carry out interstate trade. Pohlmans have made additional savings in excess of $110,000 per year by eliminating external biosecurity inspections, as well as reducing internal administration costs.

Pohlmans have an extremely high volume of product turnover, producing over 1,200 different species. During the peak season in spring, the nursery employs up to 200 staff – one of the biggest employers in the Lockyer Valley – to achieve high volume stock turnover.

BioSecure HACCP is a set of protocols and procedures applied at farm level, that enable a business to manage endemic and exotic pest, disease and weed risks. The system is designed to establish an effective internal quarantine process for both imported and exported plant material using structured procedures and modern data recording programs to support the decision making process.

“Our motto is ‘eliminate it before it becomes a problem’, and the high health approach starts from the very moment a plant is introduced into the production line,” Mr Johnson said.

“Every product that arrives at Pohlmans goes through a quarantine area, where it’s treated away from the production facility. We have boom gates around the production nursery so only authorised vehicles can enter, and all other vehicles and contractors must have vehicles physically inspected.

“Once offloaded, all deliveries are physically inspected and checked off against the invoice.

“A phytosanitary report is completed for every product, and anything deemed poor quality or untreatable is either sent back to the supplier or dumped in industrial bins outside our quarantined production area, and a credit note raised with our supplier.

“This has definitely improved the quality of the incoming product, as suppliers know that if in doubt, don’t send out.”

BioSecure HACCP is part of every stage of the plant life cycle. Once a plant is deemed healthy and introduced to the production nursery, it is monitored frequently.

“By having highly trained staff responsible for the weekly monitoring of our crops, we can detect any changes in plant health. This enables us to be proactive in the management of our crops, and with regular site surveillance, limits any build-up of pests.

“A direct result is being able to limit pesticide spraying. We can target certain crops with particular problems at the right time, rather than spray an entire hothouse. We can pinpoint which plants are at-risk early on, and gain better results with targeted applications.”

Practices like these were at the heart of a six-month trial program in Queensland and Victoria resulting in BioSecure HACCP being recognised by all Australian states and territories as an acceptable alternative to state biosecurity agencies inspecting consignments before plants are traded interstate.

As part of the six-month trial, Pohlmans issued their own plant health certificates to clients using an Australian-first, online biosecurity verification and certification system. The success of the trial has allowed other BioSecure HACCP certified production nurseries to do the same.

Using the online data management system provides efficiencies in administration, lowers costs, and offers much greater flexibility when it comes to plant movements through self-certification of consignments that meet interstate entry conditions for nursery stock.

“We ran the requirements past our existing procedures and determined what we needed to change – which was mostly our record keeping and how to ensure consistent application of critical procedures that support our integrated crop management system.

“We had to create a range of additional documentation to comply, which was made easier by utilising the BioSecure HACCP templates. To further improve efficiencies we purchased smart phones and tablets as part of the new monitoring and surveillance regime.

“Making the changes to the process of undertaking regular monitoring was relatively painless. It has modernised our internal systems, which has helped us to better identify pests and diseases, and better manage weeds and quality-related issues.

“In fact, now that we are BioSecure HACCP certified, our people are more invested in the business at each step of the production process,” Mr Johnson said.

“We have greater staff engagement and they are now far more likely to communicate and act as soon as they detect an issue.”

BioSecure HACCP is now recognised by all Australian state and territory biosecurity agencies for the certification of nursery stock for interstate trade through ‘bridging authorities’ until permanent legislative changes are completed.

Changes to the Queensland Biosecurity Act 2014 have been introduced to the State’s parliament to give a permanent legal authority for BioSecure HACCP and other third party biosecurity programs, and should come into effect in early 2017.

It’s hoped this amendment will be utilised by the other states and territories to amend or add to their legislation, giving a common legal framework across Australia that will allow production nurseries to streamline their access to interstate trade and create greater efficiencies along the supply chain.

How can I find out more?

BioSecure HACCP was developed by Nursery & Garden Industry Australia in partnership with Horticulture Innovation Australia, using the nursery industry levy and funds from the Australian Government.

To learn how your nursery business can become BioSecure HACCP accredited, go to: www.nurseryproductionfms.com.au/biosecure-haccp-certification or email biosecure@ngia.com.au