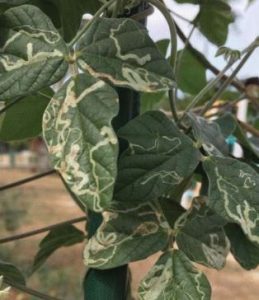 The nursery industry is collaborating with a number of horticultural industries to proactively prepare for the potential spread of the Vegetable Leafminer (Liriomyza sativae) in Australia.

The Vegetable Leafminer has been moving in a southerly direction down the Torres Strait group of islands since 2008. In 2015, its presence was detected on the Cape York Peninsula and was deemed not feasible to eradicate from the region by the Consultative Committee on Emergency Plant Pests.

The project, RD&E Program for control, eradication and preparedness for Vegetable Leafminer (MT16004), has been developed in recognition of the immense risk the pest poses to Australia’s fruit, vegetable and nursery industries. Project partners include Cesar, the University of Melbourne, Plant Health Australia, The Northern Australian Quarantine Strategy (NAQS), AUSVEG and Nursery & Garden Industry Australia (NGIA).

From now until 2020, the project will prepare for the potential spread of the pest, so as to reduce the catastrophic impact it would have if it were it to move into production areas with no management plan in place.

The next steps of the project include:

1. Investigating biological and chemical control options
2. Identifying spread pathways into Australia
3. Developing management guidelines and trapping methods
4. Modelling the spread of the pest from Cape York Peninsula
5. Developing a contingency plan and response plans in the event of a regional eradication.

AUSVEG will deliver an extension program to growers throughout the project to improve awareness of Vegetable Leafminer and to communicate methods of control as they are developed.

The Vegetable Leafminer is a very small black and yellow fly (1-2 mm in length). Female flies lay eggs inside leaves and stems and maggots tunnel inside the leaf, making visible leaf mine tracks that become wider as they grow. Leaf mines interrupt the photosynthetic ability of plants, which can lead to a secondary infection and, consequentially, reduce the marketability of produce.

Further to this, the fly is prone to developing resistance to a range of insecticides that have a very broad plant host range. Plant hosts include beans, pumpkins, eggplant, capsicum, cabbage, lettuce, cauliflower, cucumber, zucchini, potato, cole crops, and a range of ornamentals including Allium, Aster, Dahlia, Phlox, plus Solanaceae including tomato.

Anyone with questions about the project, or about Vegetable Leafminer, are encouraged to get in touch with NGIA National Biosecurity Manager, John McDonald, NGIA on 07 3277 7900 or via john.mcdonald@ngia.com.au

« Tree Stock Roadshow To Commence in 2018 » Part 5 of the SIP Series: Investing in our people