Help stop the spread of TPP in three simple steps

The exotic plant pest Tomato potato psyllid (TPP) is known to affect plant growth, reduce crop yield and spread a serious plant disease known as ‘zebra chip’ in potato, caused by the Candidatus Liberibacter solanacearum (CLso) bacterium. Currently, there has been no detection of CLso in Australia.

In February 2017, TPP was detected in Western Australia. This was the first time TPP had been found on mainland Australia, and in response the WA Department of Primary Industries and Regional Development (DPIRD) released the Transition to management plan.

The transition to management plan, which has now come to an end, aimed to up-skill industry to manage the pest, and build confidence along the supply chain. The next phase is about continued grower awareness and vigilance on farm.

A fact sheet has been released by the DPIRD to help educate, and urge production nurseries across the country to be alert, and take action where necessary.

To help protect your crops from an outbreak, the fact sheet encourages growers to follow these three simple steps.

1. Stop and take a moment to get to know what you’re looking for.

Eggs are usually laid on the lower surface of the leaves or around the leaf edge. Eggs are white when first laid, before changing to yellow and then orange a few hours later.

Nymphs are up to 2mm long, and oval-shaped with a flattened scale-like appearance. Identify young nymphs by their yellow colouring, and red eyes compared to older nymphs, which are green and fringed with hairs. Older nymphs also have visible wing buds.

Adults resemble small winged cicadas, but are only about 3mm long. The body is brown, with white and/or yellow markings and a broad white band across the abdomen. Their wings are transparent and rest over the top of the body.

2. Check your crops for warning signs

Whether you’re a commercial or backyard grower it’s important to know what a crop affected by TPP looks like.

Keep an eye out for insects at various life stages on the underside of leaves and leaf damage such as stunted and yellowing growth tips, or discolouration of leaf margins. Leaf cupping, stem death and severe wilting are also tell-tale signs that your crop might be affected by TPP.

The insects are also known to leave ‘psyllid sugars’ – white, sugar-like granules excreted by adults and nymphs – which coat leaves and stems, and can also promote sooty mould growth.

(Left to right): Dull fruit colour from TPP infestation and psyllid sugars left on a leaf. 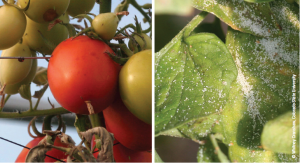 Contact the Exotic Plant Hotline on 1800 084 881. This number will put you in contact with your state or territory department of primary industries.

Biosecurity has never been more important to safeguarding the health and profitability of the Australian nursery and garden industry. Check out this helpful guide to early detection to protect your nursery.