Camellia petal blight is not present in Australia. It is present in New Zealand, the United States and Japan, with a restricted distribution in parts of Europe and the UK. 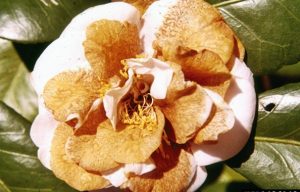 Initial symptoms on petals include darkening of the veins and the appearance of small, brown, irregularly-shaped spots or blotches. These spots rapidly expand on susceptible varieties, until the whole flower is brown and dead. Affected petals are dry or leathery but do not crumble when handled. The darkening of veins gives flowers a distinctive netted appearance. Infected flowers normally fall intact on to the ground prematurely. Sclerotia (small black resting bodies) form at the base of infected petals several weeks after flower fall.

The netted appearance of petals, along with the fact that symptoms only appear on petals and do not start from petal margins, distinguish Camellia petal blight from a range of other symptoms seen on camellias, such as cold injury and Botrytis blight.

Sclerotia may germinate to produce small, light brown, saucer-shaped apothecia (mushroom-like structures) during winter and spring, although some sclerotia may remain dormant for up to 5 years on or near the soil surface. Large numbers of spores (ascospores) are forcibly released by apothecia, usually within 1-2 weeks of apothecia formation. These spores are carried by wind (up to approx. 24 km) on to emerging camellia flowers, where they germinate and infect flowers under favourable (wet) conditions. Closed flowers cannot be infected, but infection can occur at any time after the petals are visible in opening buds.

The fungus cannot be eradicated once present. Ciborinia camelliae can easily be spread during international trade via cut flowers of camellia, on camellia plants with open flowers, or as sclerotia in soil accompanying camellia plants.

Species of Camellia are the only hosts of Ciborinia camelliae. All cultivars and hybrids of camellia appear to be susceptible, although sasanqua camellias are infected less often in California.

If this species is suspected it should be reported to your local biosecurity agency or call the emergency plant pest hotline: 1800 084 881

For further information please refer to the industry Pest ID Tool at www.pestid.com.au