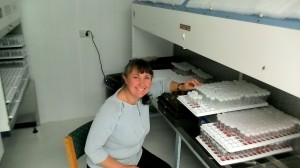 Karen Brock, from Winkleigh in Tasmania, has been awarded a prestigious Nuffield Scholarship, supported by Horticulture Australia Limited using voluntary contributions from Nuffield Australia and matched funds from the Australian Government.

Karen hopes to reduce the assessment time of soft berry fruit by developing a technique for datamarking of genetic points in the plant.

Their 89 hectare farm consists of 52 hectares of commercial forestry plantation and 10 hectares of wetlands, with the balance in production with greenhouses, hard standing areas for potted plants and open ground production areas for raspberry breeding stock and rose production.

Karen says at present it takes up to three years to get new soft berry fruits to market for assessment, however she believes this time could be halved by using Polymerase Chain Reaction (PCR) technology to develop a techniques for detecting pathogens.

“This could mean instant verification of pathogens residing in plant tissue, enabling rapid multiplication which then results in material being released to the market in just 18 months.

The PCR technology will be focused on enhancing the blueberry, blackberry and raspberry breeding programs already developed in Australia by breeding companies in the soft fruit industry,” she concludes.

Karen says another benefit of PCR technology is that in developing genetic pointers, the plant material can be genetically identified at a later date should illegal propagation of the materials occur.

To carry out her research, Karen hopes to visit Oregon, Arkansas and California in the USA, as well as the UK, Chile, Morocco and New Zealand.

Nuffield Australia is an organisation providing opportunities to Australian farmers to travel overseas on an agricultural research scholarship. It is a 16-week program consisting of both group and individual travel. In March 2014 we will have one group travelling through Canada, United States (California and Washington DC), Mexico, Europe, Brazil and New Zealand, while a second group will tour South Africa, Kenya, Eastern Europe, Europe and USA.