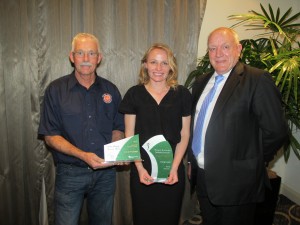 The 2013 winner of the National Young Leader and Heather Rumsey Memorial Award was announced last week during the social evening at Green Expo Sydney. The 2013 honors went to Sarah Peacock (Formerly of Jamberoo Native Nursery) who narrowly edged-out Leigh Brennan of Andreasens Green for the title.

Sarah was awarded the trophy by Gary Eyles who was instrumental in the establishment of the Heather Rumsey Memorial Award in 2009 and NGIA CEO Robert Prince.