The new Your Levy at Work website has been created as a means to distribute information and news on levy funded programs directly to stakeholders.

The site allows for 24/7,  ‘real-time’ access and sharing of levy information whilst also generating a monthly email of recent posts to all those subscribed to receive it.

You will receive a monthly email of recent posts by either signing up directly  (http://eepurl.com/hPZvI) , or as a previous subscriber to ‘NGIA Clippings’ which has now been super-seeded by this e-news publication.

A new project AH11014, Across Horticulture Leadership Training, has been implemented and there were over 93 applicants to participate. Two groups of 25 – Current Leaders and Emerging Leaders will be involved in a training program that utilises a combination of on line and Face to Face sessions. The Objectives of the program are:

For more information on this program visit: http://horticulture-nextgeneration.com./

Information on Training programs delivered by Mindshop can be found at: http://www.web.mindshop.com/online-learning

Across Industry program benefits all sectors of Horticulture

All horticultural industry sectors contribute to the funding of the across industry program through R&D levy and R&D Voluntary contributions (VC) which are matched by the Australian Government.

In addition to the collaborative project investment undertaken through multi industry funded projects, R&D project investment made through this program focuses on providing outputs that are widely beneficial across the breadth of horticulture.

The Across Industry Committee provides program investment advice to HAL on behalf of all member industries.

Project investment within the Across Industry program is currently made in the context of four objectives:

• Enhance the efficiency, transparency, responsiveness and integrity of the supply chain for the total industry to provide clear market signals.

• Maximise the health benefits of horticulture products in the eyes of consumers, influencers and Government.

• Position horticulture to compete in a globalised environment.

For more details on the Across Industry program which utilises funds from the Nursery Industry Levy refer to the HAL website  http://www.horticulture.com.au/industries/Across%20Industry%20Program/across_industry_program.asp 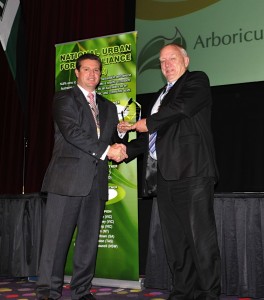 Nursery & Garden Industry Australia (NGIA) has become a Platinum Partner of the National Urban Forest Alliance, which has been formed to promote the growth and recognition of the urban forests in Australian cities and regional centres.

The CEO for NGIA, Mr Robert Prince says the industry supported the formation of the Alliance, which brings together stakeholders with an interest in urban forest policy, planning, measurement and promotion.

“Australia needs a healthy urban forest and Australians need to value and care about the urban forest as an essential environmental, economic and community asset. The evidence is clear from research that we have much to gain by growing our urban forest.”

“It is encouraging that key local governments have recognised the importance and the value of the urban forest and have joined the Alliance, but there is still much to do to get widespread recognition throughout the community and among other stakeholders,” Mr Prince said.

At present the National Urban Forest Alliance has 12 major stakeholders including the city councils of Melbourne, Sydney, Brisbane, and Darwin as well as the Australian Landscape Industry and Arboriculture Australia.

ENSPEC Pty Ltd is the other Platinum Partner, and an increasing number of other likeminded organisations, councils and professional associations are expected to join the Alliance before the end of 2012.

Mr Prince said that the NGIA had joined as a Platinum Partner as there was much that the industry needed to do to address the issues and build demand for greenlife in urban environments.

“Our members grow greenlife and the urban forest means all plants – trees, grass and shrubs – so we are vitally concerned. NGIA is about promoting the bigger issues so that the urban forest is recognised by the community and other decision makers.”

NGIA’s theme for 2012 is ‘More Trees Please’ as part of its strategy to advise the community to Improve Your Plant/Life Balance, both of which focus on improving the health of people through growing the urban forest and other initiatives.

“We look forward to working more closely with Alliance members to build awareness of the importance of the urban forest to our health and wellbeing,” Mr Prince added.

Momentum is building behind the new nursery industry market research project.  The success of this project is paramount to ensuring the successful implementation of industry strategic planning.

This ambitious project seeks the support of all industry greenlife producers, allied traders and growing media suppliers in the collection of monthly industry statistics.  With input into the project extending to producers and suppliers to primary industry, forestry and more, this project is the largest of its kind seen by the nursery industry.

“As Chairman of the IAC, I see this research as the most important levy project we have. The information collected will inform future levy project planning and enable us to accurately measure industry size and growth,” said David Matthews, Chairman of the Industry Advisory Committee, at a recent meeting in Victoria.  “Participating businesses will have access to current industry data compared with their own, vital for effective strategic business development” he continued.

END_OF_DOCUMENT_TOKEN_TO_BE_REPLACED

Accurate industry data will strengthen the Industry’s position among legislative sectors including education and training, environment, finance and more. It will be used for strategic planning of industry activities and to support our communications to key stakeholders.