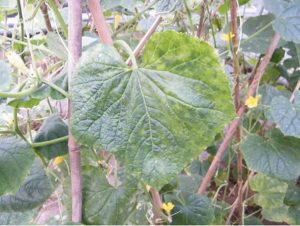 The symptoms found on an infected plant will vary with the genus, species, cultivars and growth stages of the plant, and the strain of the virus.

Other mosaic diseases, caused by potyviruses, can cause similar symptoms. This makes the disease difficult to identify by symptoms alone and laboratory tests are necessary to confirm infection.

CGMMV is very stable and can survive for long periods (at least several months) in plant debris, soil, and on vehicles, equipment and tools. Contaminated seed, infected transplants and contaminated equipment are the most common ways the virus can be introduced into a crop.

The virus is transmitted through the seed of several cultivated cucurbit species and seed transmission has been largely responsible for the international movement of the virus.

The virus does not require a specific insect vector for transmission. Chewing insects like leaf beetles may play a minor role in spread. Honey bees can transmit the virus through foraging and collecting pollen.

The virus is largely spread by contact which includes the following:

Plant handling and pruning favour the spread of the virus. CGMMV is generally more prevalent in greenhouse crops due to higher plant densities and more frequent contact.

CGMMV infects members of Cucurbitaceae, including rockmelon, cucumber, watermelon, zucchini, pumpkin, squash, bitter gourd, bottle gourd and some wild and weedy cucurbit species. There are several strains of CGMMV that can cause different type of symptoms according to the host.

CGMMV has also been detected in a number of non-cucurbit host plants, particularly some weed species in the families Amaranthaceae, Apiaceae, Boraginaceae, Chenopodiaceae, Portulacaceae and Solanaceae.

More information is available at pestid.com.au and through the QLD Dept. of Agriculture

NOTE – CGMMV is present in the Northern Territory and Western Australia. It has also been detected in Queensland and is contained and under eradication. In states other than NT and WA, this disease should be reported to your local biosecurity organisation or through the exotic plant pest hotline 1800 084 881.

« The application deadline for 2019 Hort Masterclass has been extended! » Plant Life Balance expands beyond living spaces