Project proves green infrastructure is more than a building garnish 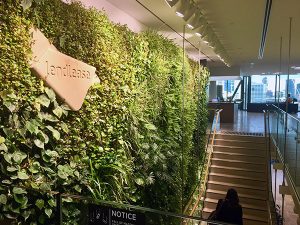 The push is on for the health and social benefits of green infrastructure to be scientifically recognised in sustainability rating tools commonly used within the Australian infrastructure and building industry.

The project Integrating plant life into building and infrastructure rating tools (NY16007) seeks to inform the development of sustainability rating tools to formally recognise and ‘credit’ the benefits vegetation has in the built environment, and to promote the integration of more plants and green space into urban development projects.

A strategic investment under the Hort Innovation Nursery Fund, the project recognises that architects, urban designers and developers are key influences in either increasing or decreasing green infrastructure.

“The objective is to provide evidence of green infrastructure benefits in a format that can be adopted into existing sustainability rating tools,” said Mr Davies.

“It’s all about getting more plants into the built environment, which means growing the demand for suitable plant varieties across different types of building projects and increasing plant sales.

“Green infrastructure is often left to the last minute or at later stages of planning but, for it to be successful, it must be considered much earlier in the piece of work.

“We see this project as an important step in helping to build that awareness, particularly in the building industry, and to help address the issue more broadly.”

Edge Environment recently held an extension event at a location that is leading the way in green infrastructure, the Lendlease office in Barangaroo, Sydney, in a high-rise building that boasts more than 10,000 indoor plants.

More than 50 representatives from across the building and nursery supply chain attended the event, to hear about how to use green infrastructure to make Australian cities more liveable.

Key findings from the project were presented at the event, including the following benefits of green infrastructure in the built environment:

The event engaged a range of key speakers, including OzBreed National Business Development Manager Emil Montibeler, who discussed plant breeding for a certain function or characteristic, such as suitability for use in a green wall. Republic of Everyone Founder Ben Peacock, drew connections between the project objectives and the goal of 202020 Vision to increase urban green space by 20 per cent by 2020.

Edge Environment is currently summarising the project findings in a factsheet to help communicate the outcomes to the nursery industry and the wider horticultural sector. This information will be available shortly.

« Pest of the month: Dutch elm disease » Production nursery workshops are on the way