PROJECT UPDATE: Spider lilies can be used to warn of tospovirus infections

Tospoviruses are among the most economically devastating plant pathogens in the world. One of the main reasons they have such notoriety is their vast host ranges. Tomato spotted wilt virus (TSWV) has a worldwide distribution and infects more than 1,000 plant species in over 85 plant families.

All tospoviruses are transmitted by thrips, and the major vector species in Australia are the western flower thrips (Frankliniella occidentalis), onion thrips (Thrips tabaci) and melon thrips (Thrips palmi). Interestingly, only the first and second instars of these thrips can acquire the viruses but once they have fed on an infected plant, the thrips remain infectious for the remainder of their lives, right through to adulthood.

One problem in controlling tospoviruses is identifying the sources of the infections, as many different weed species can act as infection reservoirs.

In vegetable crop plant species, the most effective control method for tospoviruses is the deployment of disease resistance genes. In ornamental plant species, disease control must rely upon the control of the thrips vectors.

The levy-funded project ‘Improving on-farm surveillance strategies for tospoviruses and thrips to enhance the biosecurity of the nursery industry’ (NY19007) is working to develop industry surveillance tools to mitigate the risk of viral infection.

The University of Queensland, who is a partner in this research program with La Trobe University, has recently discovered that spider lilies (Hymenocallis caribaea and Hymenocallis littoralis) can be used as sentinel plants for tospovirus surveillance. This means that the spider lilies can be used to alert growers of the presence of tospoviruses before they affect other plants, providing the first line of detection, akin to the ‘canary in the coal mine’.

A recent review of the international scientific literature supported the idea that spider lilies are susceptible to infection by many of tospoviruses.

The hypothesis originated from an observation that nearly all spider lilies in south-east Queensland have disease symptoms suggestive of a tospovirus infection (Fig. 1).

There are two possible explanations for the prevalence of tospovirus symptoms in spider lilies. Either the viruses were being spread by the division of infected clumps of plants or there were repeated inoculations of the plants by migrating thrips.

Three experiments were done to test these two alternative hypotheses.

Firstly, the question of whether infection in spider lilies was localised to certain parts of the plant or the virus moved systemically around the plant was asked. Leaves were collected showing ringspot symptoms and many samples for diagnostic testing were taken (Fig. 2). This experiment showed that the virus could only be detected within the ringspot lesion and not in healthy parts of the leaf, suggesting that infection was very localised, probably at the point where the thrips insect had fed.

In a second experiment, diseased plants growing outside in gardens in Brisbane were identified, which were dug up, bulbs included and transplanted into pots in an insect-free glasshouse. While the leaves that were already diseased retained their symptoms, all newly emerged leaves produced after transplanting the plant into pots were entirely healthy (Fig. 3).

The final experiment was to investigate the genetic diversity of the virus in different spider lily plants. Quite significant genetic variation of the virus between plants was observed.

The conclusion from these three experiments was that spider lilies are continually reinfected by migrating, virus-containing thrips, and each ringspot that is observed on a leaf is indicative of an independent inoculation event.

The virus appears capable of moving to neighbouring cells at the point of inoculation but is not able to be transported long distances in the plant, either into the newly emerging leaves or into the bulb.

Hence, the number of ringspot lesions on a leaf indicates the infection pressure from tospoviruses in the environment from migrating thrips.

If you have any questions, please get in touch with the project lead, Andrew Geering, who is an Associate Professor at The University of Queensland and also President of the Australasian Plant Pathogen Society. 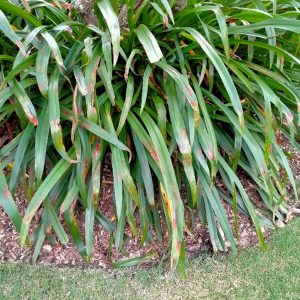 Fig. 1. Badly diseased spider lillies on the Gold Coast. The ringpot lesions on the leaves are caused by tomato spotted wilt virus.

Fig. 2. Leaf from a Hymenocallis caribaea plant. Sample location 3 is at the centre of a large ringspot lesion caused by the tomato spotted wilt virus. The gel photograph below shows diagnostic results for different sampling locations around the leaf (a horizontal band at about 900 bp indicates a positive diagnostic result for the virus). 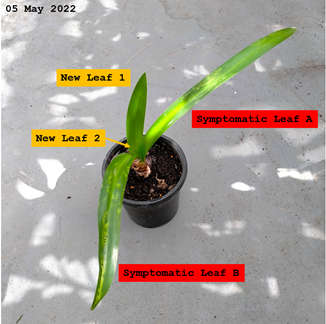 Fig. 3. A diseased Hymenocallis caribaea plant was taken from a garden and transplanted into a pot in the glasshouse. The older leaves have ringspot lesions, whereas the younger leaves are healthy.

The ‘Improving on-farm surveillance strategies for tospoviruses and thrips to enhance the biosecurity of the nursery industry’ (NY19007) project is funded by Hort Innovation using nursery research and development levy and funds from the Australian Government.

« June Pest of the Month: Grey mould » Mid-year applications are open for the Hort Masterclass!